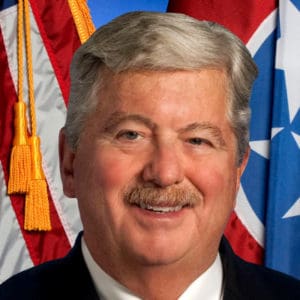 Family and Personal:
Sen. McNally is married with two children and is a hospital pharmacist.

Councils and Boards:
He serves as Lt. Governor.

Awards:
McNally has won a number of awards, including the 2012 Legislative Hero award from the Tennessee Association of Mental Health Organizations.

Lt. Governor Randy McNally (R), District 5, scored 67% on votes, placing him in the 18th-23rd position (tied with a number of other members) out of 33 members. That puts him into the lower 50 percentile. His leadership merits were in the negative, prescribing the F grade on leadership. Merits are accrued based on sponsorships and co-sponsorships of good bills and other acts of valor or good conduct. Demerits are accrued for the opposite.

Here are the bills we chose to oppose but McNally supported:

These bills beg the question: who is Senator McNally serving? Look at each bill individually and ask yourself who benefits. Do you feel enabled or rewarded by any of the above legislation?

The Speaker of the Senate has the responsibility of seeing that the people’s voice is heard in the legislation passed or blocked, according to the will of the majority.  These members are, after all, representatives of the people.

It is interesting to note that nine of twenty-eight bills that were chosen for their importance passed through the people’s house—the Tennessee House of Representatives—but were either not taken up at all, or were immediately killed, in the senate by one means or another. We consider that an arrogant dereliction of duty. Here are the nine important bills that the senate ignored, ensuring that they would not become law in Tennessee:

There are other bills that were treated similarly but these were among the bills chosen for their importance to the citizens of Tennessee under the current cloud of governmental tyranny and constitutional malfeasance. We must do better.