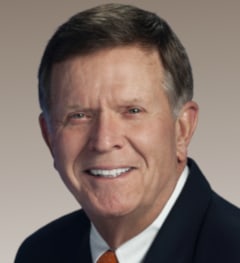 Family and Personal:
Sen. Rose is married with three children and six grandchildren. He is the President of Rose Construction.

Memberships:
He is a member of First Baptist Church of Covington, TN, and Hatchie River Region Boys and Girls Club.

Councils and Boards:
He is a board member of the Dyersburg State Foundation and the Tennessee Baptist Children’s Home Board of Trustees.

SB1034/HB1513 – Bell/Cochran – Creates a database for approved supplemental material for teachers. This makes clear the distinction between acceptable instructional material and that which is prohibited, making it easier for teachers to comply with the new laws prohibiting certain material (passed).

TLRC chose to score one of Senator Rose’s bills:

SB843/HB513- Rose/Gant – Increased penalties for various lawless activities when protesting/rioting (sent to Summer Study). As the sponsor, Senator Rose showed a lack of courage and commitment by suggesting that the bill be deferred to Summer Study.

Senator Rose lost points because of two bills he supported that TLRC opposed:

TLRC opposed those bills on fairness, constitutional, and fiscal-responsibility principles. Senator Rose sponsored fifty bills, twenty-two of which passed into law, one of which TLRC scored. To access, go here.

We do not need more laws; we need better laws, and enforcement of the laws already on the books. The grassroots are looking for courage in our legislators: courage to stand up for constitutional principles over pressure from leadership and paid lobbyists. Senator Rose could be that warrior.