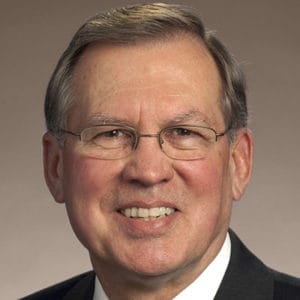 Family and Personal:
Sen. Haile is married with four children and seven grandchildren and is a pharmacist.

Councils and Boards:
He serves as 1st vice chair of Senate Health and Welfare Committee and Speaker Pro Tempore.

Senator Ferrell Haile has served District 18 since 2011. He is the chairman of the Ethics committee and 1st Vice-Chair of Health & Welfare. Senator Haile has a disappointing vote score of 73% and a leadership grade of D. The TLRC Leadership grade is based on merits and demerits awarded for sponsorships, co-sponsorships and other actions that are deemed meritorious or deleterious. His support of constituent-unfriendly bills seems to be his hallmark. He supported every bill TLRC chose to oppose:

The one exception was a bill for which he appeared to be absent so neither supported or opposed on record:

Senator Haile opposed HB1870/SB1880, which would prohibit a Tennessee licensing board or disciplinary subcommittee from acting against a physician’s license based solely on the physician’s recommendations to a patient regarding treatment for COVID-19. The bill would also prohibit a pharmacy from blocking or attempting to block a patient’s access to COVID-19 treatments, such as Ivermectin or Hydroxychloroquine. His vote helped to kill this important bill in the Senate Health committee.

Haile voted aye to HB2032/SB2026, giving dentists the authority to administer COVID-19 vaccines and vaccines against the human papillomavirus (Gardasil), treating minors age 14 or older without a parent or guardian’s consent. Public outcry caused the bill to be taken off notice in the house after passing in Senate Health & Welfare.

The Tennessee Senate has an embarrassing track record; they ignore bills passed in the people’s house while they are very good at allocating tax-money to special interests. Somehow, the real problems never get addressed because they take tough decisions. Senator Haile is not famous for making tough decisions.