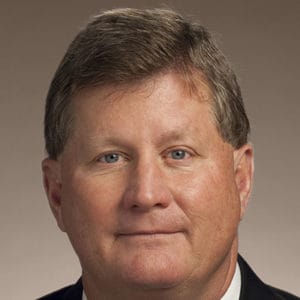 Family and Personal:
Sen. Southerland is married with one child and works as a mortgage broker.

Memberships:
He is a member of Financial Services Standing Committee of the National Conference on State Legislatures, Buffalo Trail Baptist Church, Morristown Area Chamber of Commerce, Rotary Club, and the National Rifle Association.

SB318/HB18 – Hensley/Griffey – Real Constitutional Carry. This bill would be totally compliant with the second amendment of the U.S. Constitution (placed behind the budget in the house and deferred in the senate). A slightly less compliant bill (SB765/HB786) passed.

Senator Southerland lost points because of this bill he supported that TLRC opposed:

We don’t know the reason he did not vote at all on SB0783 but, unlike most of his fellow senators, he did not lose points on that one:

TLRC opposed those bills on fairness, constitutional, and fiscal-responsibility principles. Senator Southerland sponsored twenty-three bills, five of which passed into law, none of which TLRC scored. To access, go here.

We do not need more laws; we need better laws, and enforcement of the laws already on the books. The grassroots are looking for courage in our legislators: courage to stand up for constitutional principles over pressure from leadership and paid lobbyists. Senator Southerland could show a little more courage and fidelity to our US and TN constitutions. He represents a very conservative district and should reflect their values.

A parents' Bill of Rights.