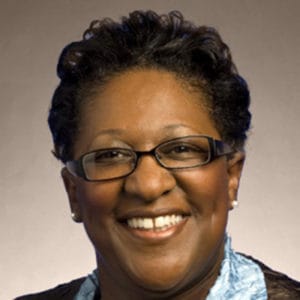 Family and Personal:
Rep. Camper has one child and is a retired Chief Warrant Officer Three with the US Army. She is also owner of Key II Entertainment and a substitute teacher in the Memphis city school system.

Councils and Boards:
She serves as Democratic Caucus Treasurer and is TN State Director for the National Foundation for Women Legislators. She is board member of National Organization of Black Elected Legislative Women, Vice Chair of Tennessee Economic Council on Women, Board member of Women’s Actions for New Directions Region IV Chair of National Black Caucus of State Legislators and Second Vice President Chair, Shelby County Delegation. She is Executive Director of the Humble Hearts Foundation, Inc.

Rep. Camper followed the Democrat party line and voted against bills chosen for education reform, medical freedom, second amendment rights, fiscal responsibility, governmental transparency, election integrity, and constitutional fidelity. Rep. Camper earned a vote score of 16% and a leadership grade of F based on her sponsorships and other meritorious or deleterious actions.

Here are some of the bills Rep. Camper supported:

Here are some of the TLRC-endorsed bills Rep. Camper opposed: