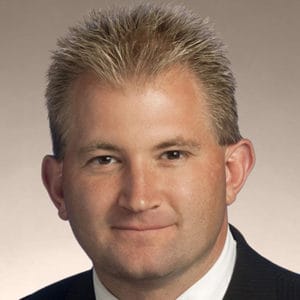 Family and Personal:
Rep. Lamberth is married with two children and is an attorney.

Councils and Boards:
He is chair of the House Criminal Justice Committee. He is also a board member for Children are People and chairman of Portland Community Education Foundation.

He co-sponsored ten of our favored bills:

SB0828/HB1181 – Rudd/Bowling – Fetal remains must be disposed of by burial or cremation, making it prohibitive to harvest or sell fetal body parts (passed).

Lamberth earned a commendable 9.5 out of 10 on constitutional fidelity. His three errant votes supported the following bills which TLRC opposed:

As House Majority Leader, Lamberth is obliged to sponsor the Governor’s bills. For that reason, unlike other members, we do not score or judge Leader Lamberth on the bills he sponsors.

We do not need more laws; we need better laws, and enforcement of the laws we have. The grassroots are looking for courage in our legislators: courage to stand up for constitutional principles over pressure from leadership and paid lobbyists. Lamberth is highly qualified for the role. We are at a crisis point and now is the time to stand for the people instead of special interests, the wealthy, and well-connected, and against those who assume power through corruption and coercion. If we do not, we could very well lose our republic and our liberties.