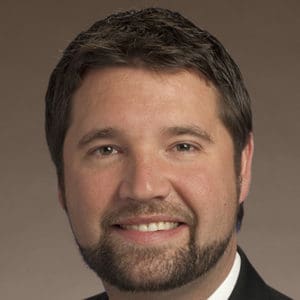 Family and Personal:
Rep. Farmer is married with two children and is both an attorney and businessman. He is also a member of First Baptist Church of Sevierville.

Councils and Boards:
He is chair of the House Civil Justice Committee.

Farmer has a commendable record: a 96% vote score and good scores on most leadership essentials, including some very pro-constitutional votes. He voted against HR110, a resolution to honor Dr. William J. Barber II, a man who is on record demanding congressional lawmakers end the filibuster and pass “voting rights” legislation (HR 1) antithetical to the constitution and the imperative that election laws are determined by the sole authority of state legislatures. He also voted against HB703, a bill that will provide a multi-million-dollar state funding grant for a proposed minor league baseball stadium for the Tennessee Smokies, a double-A team which is owned by University of Tennessee President Randy Boyd. Boyd and his wife Jenny are mega-multi-millionaires; why are Tennessee tax-payers financing his baseball enterprise? We commend him for those courageous votes.

Farmer conducted himself well until 3/09/21 when Tim Rudd, Chairman of the Elections and Campaign Finance Subcommittee, presented his resolution, HR0023, to Authorizes the speaker of the House of Representatives to appoint a committee to meet with a like committee from the Senate to consider the removal of Ellen Hobbs Lyle from the office of Chancellor of the Twentieth Judicial District by the Tennessee General Assembly acting pursuant to Article VI, Section 6 of the Constitution of Tennessee.

Davidson County Chancellor Ellen Hobbs Lyle had ruled that the state’s limits on absentee voting during the pandemic constituted “an unreasonable burden on the fundamental right to vote guaranteed by the Tennessee Constitution.” The judge wrote that any eligible voter can get an absentee ballot to avoid contracting or passing on COVID-19 in the “upcoming elections during the pendency of pandemic circumstances” (https://tennesseestar.com/tag/ellen-hobbs-lyle/). The fact that all election laws and rulings are under the strict authority of the state legislature seemed to elude Judge Lyle; She had no authority to rule on anything that would alter electoral law.

1. Rudd’s main testifying witness was unable to be there because of illness, so he began his presentation by asking for a roll. (A postponement to a later meeting of the committee.)
2 . Chairman Farmer ruled that three testifying witnesses supporting the Judge that were present, some from a considerable distance, would be allowed to testify, and “…we’ll take up your request after that.”
3 . After 5 minutes of irrelevant testimony (family history, friendship, etc.) from Celeste Herbert, a Knoxville lawyer, Chairman Bruce Griffey asked questions very pertinent to the case.
4. Herbert suggested that damaging comments by Lyle were taken out of context and that the transcripts would underscore that. Griffey posed that the entire General Assembly should get those transcripts and read them. That was ignored by the chair.
5. Bob Boston, a Nashville Attorney, then testified and was corrected by the Chairman regarding the rolling of the bill. He once again said “…and we’ll take that matter up once we go back onto session.”
6. Boston proffered specious arguments that we could justly challenge here but we will not take up the space. The outrage is over the violation of legislative process and common courtesy.
7. Once again, Griffey asks very pertinent questions which serve to expose Budd’s erroneous belief that the Supreme court is the final arbiter of all questions. Boston cannot be swayed.
8. Curcio mounted an impressive historical account of a similar question of judicial misconduct at the federal level back in 1804 where the judge under question prevailed and was not removed.
9. Curcio’s concluding remarks suggest that judges should only be removed for criminal misconduct or inability to perform their required duties. We respectfully disagree. Judicial overreach into to the authority of either of the other branches disrupts the balance of powers that are so critical to the survival of our constitutional republic.
10. The third testifier was Judge Joe Riley. Bottom line: all three preferred to rely on the judicial system to adjudicate questions of the judiciary: the appellate system, the TN supreme court, and the Board of Judicial Conduct–a closed system of self-oversight.
11. Griffey asks Riley if there was not a concerted effort leading up to the election to expand mail-in voting including a Perkins-Coie funded lawsuit that came before Judge Lyle. Chairman Farmer admonished Griffey to stay on the resolution.
12. ..Exceptional arguments by Griffey outlining avenues the Judge could have and should have taken.
13. As soon as Chairman Farmer resumed regular order, Curcio called for the question. (What happened to “…we’ll take that matter up once we go back onto session”?)

A questionable voice-vote was then taken, first on “any objection” and then a rushed vote on HR0023 so that responses were mixed and unclear. A roll-call vote was requested by Griffey but denied by Chairman Farmer. The rules were challenged and objected to by Griffey but ignored as “…a question for the clerk.” By Farmer.

This whole drama appeared to be orchestrated by certain members, including the two chairmen, Curcio and Farmer. To watch the proceedings, go to: https://wapp.capitol.tn.gov/apps/BillInfo/Default.aspx?BillNumber=HR0023

This was a disgrace and embarrassment for the entire General Assembly.

FYI: Statewide jurisdiction has since been removed from Davidson County and Judge Lyle has announced her impending retirement.

We regret that Chairman Farmer was a party to this unfortunate incident. Outside of this, his record is quite commendable. We hope this is the one and only injudicious incident we will witness from this otherwise good public servant.