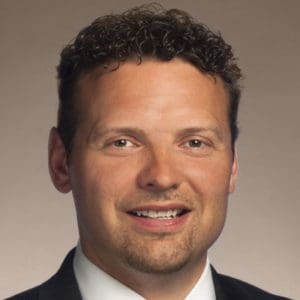 Family and Personal:
Rep. Zachary is married with one child and is an Executive Vice President of Americomm. He is also a member of First Baptist Concord church.

Councils and Boards:
He is vice Chair of the House Insurance and Banking Committee. He is also on the Board of Directors of International Sports Consulting and partner of the Center for Christian Statesmanship on Capitol Hill.

Representative Jason Zachary (R) has served in the House since 2015.  Representative Zachary has a vote score of 63%, placing him #58-61 (ties) in a body of 99. His leadership grade of A- places him at #20.  Leadership grades are based on sponsorships, co-sponsorships, amendments, both meritorious (+) and deleterious (-), and other bold and courageous acts (+) or furtive, unprincipled acts (-).

Representative Zachary should always engage in the battle against bigger government and for constitutional principles. We need principled members to battle against government expansion, for our 10th amendment rights, and to make good policy decisions for ordinary Tennesseans by Tennesseans. We are in crisis. We can and must do better.