This article was compiled by multiple people who spent countless hours and days in committee meetings, the halls of the statehouse and legislators’ offices. Pay special attention to the “procedural ruses” listed below. An ongoing goal of Tennessee Rising is transparency and accountability, and that requires knowing how the sausage is made.

Before or after reading the 2019 session summary, make sure to look up your legislator’s report card, and share the site with your friends.

In the 2019 session of the Tennessee General Assembly, there was a lack of resolution on the part of most members. Preservation of one’s status with leadership and lobbyists, re-election and general popularity seemed more important than doing what is good for the state and district constituents. Most legislator’s lacked either courage or leadership. Sometimes both. One word can some up 2019’s legislative session, timidity.

The few courageous new members that boldly come forth with freedom friendly bills were not well supported by veteran members as a whole, but were shut out and their pro-activity discouraged. Those bills were not always perfectly constructed, but instead of advising and helping to improve the bill, often the treatment was early rejection in sub-committee without much discussion as to the merits of the idea behind the bill.

A number of the bills supported by TLRC were passed in the House and made it through a Senate committee, only to be killed in the final Senate committee or on the Senate floor. In these cases, the House, more closely representing the citizens of Tennessee by virtue of smaller districts, has responded to the wishes of their constituents by sponsoring, discussing, and passing the legislation, but, at the last stage, only to have the senate disregard their wishes and their efforts in a “we know better” attitude, killing the bill and the hopes and expectations that it would become law.

With regards to abortion, two important bills were killed. The first was written to deny abortion once an unborn child’s heartbeat is detected. The other denies state or taxpayer money to entities providing abortions. Another bill prohibited governmental entities from contracting with a person who does not provide evidence of work authorization status.

Like many others, the 3 bills above were passed in the House of Representatives but were defeated in the Senate. Far more frequently, good legislation was killed in committee before a full vote even occurred. Tennessee Rising wanted more activity with regards to reform of civil asset forfeiture, occupational licensing, certificates of need, sentencing/criminalization reforms, transparency in government payments to private parties, proof of citizenship for Department of Health services and much more. Legislation existed on all of these items, but none of them came to fruition.

In 1975 Ronald Reagan said: “Our people look for a cause to believe in…raising a banner of no pale pastels, but bold colors which make it unmistakably clear where we stand on all of the issues…” He continued with the banner metaphor saying, “It must represent certain fundamental beliefs which must not be compromised to political expediency, or simply to swell its numbers.”

This year was disappointing, not because of bad votes, but because of the general timidity that led to very few freedom friendly pieces of legislation becoming law. Instead, the legislature hoisted a banner of pale colors and shied away from anything bold.

For the upcoming activists, you should know these common procedural ruses:

SUMMER STUDY – Sometimes an actual time is set during the summer to further study the issue and attempt to come up with a better bill. More often it is just a graveyard for bills and issues they would rather not have to deal with.

FISCAL NOTES – One way to make certain a bill does not pass is to put an unaffordable price-tag on it. “Behind the budget” means it was tagged with a fiscal note; the measure had not been considered in the budget and it did not fall “within the sweep” or within limited fungible money that was included in the budget.

DEFERMENTS – Kicking the can down the road; send to another committee or to “next year”.

HEAD PAT – A vote or action to appease some organization or constituency that doesn’t actually mean anything.

MEME – A false argument or rumors, perpetuated to cloud reality.

SHINY OBJECT – Legislation or an issue with good talking points but no substance, contrived to distract from the real issue.

SHOW VOTE – A vote that doesn’t amount to anything, but gives lawmakers a talking point for their constituents. Often this comes after the whip count and they know their vote won’t change the outcome of the bill but, when it’s useful, they can tell their constituents they voted the other way.

HAMSTER WHEEL – Long, drawn out busy work designed to keep people busy: special committees or actions, investigations that are designed to go nowhere, waste people’s time, and generate headlines while keeping folks happy, allowing them to be seen doing something, even though it is not productive.

SHOW SPONSORSHIP – Co-sponsorship of a bill that doesn’t amount to anything, but gives lawmakers a talking point for their constituents. Often this comes when they know the bill won’t go anywhere (get “killed” somewhere along the way), but, when it’s useful, they can tell their constituents they sponsored the bill.

Tracking your legislators is crucial to accountability. The Tennessee Legislative Report Card is one of the most revealing ratings. By forewarning legislators of TLRC “key votes,” the General Assembly knows we are watching and will hold them accountable for which side of an issue they take. We will make sure each office has the information they need to take an informed, conservative position before casting a vote. We strive to evaluate every issue, big and small, to ensure accuracy of our scoring methods by making sure members stick to principles.

Thanks for reading our 2019 summary. If you can spare $5, help support our ongoing efforts. 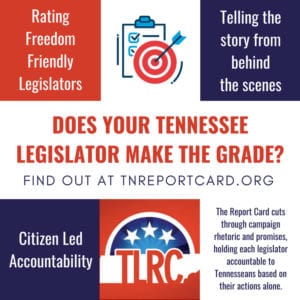 Notice:  A score has been revised for one of our distinguished members of the Tennessee House of Representatives.  Chairman Cameron Sexton received an incorrect vote score.  His corrected vote score is 98%, raising his Leadership Grade to a B+.  We regret the error and ask our readers to share this important revision.   For scoring and grading […]
Read More → 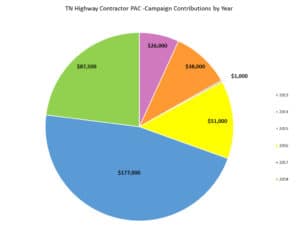 Did PAC Money Influence House Votes On The IMPROVE Act?

Like most political action committees (PAC), the Tennessee Highway Contractors PAC contributes money to state legislators’ campaign accounts.  But would it surprise you to know that those contributions to State House members peaked in 2017, when the gas-tax and registration-fee increasing IMPROVE Act was voted on and passed by the Tennessee General Assembly? The image […]
Read More →